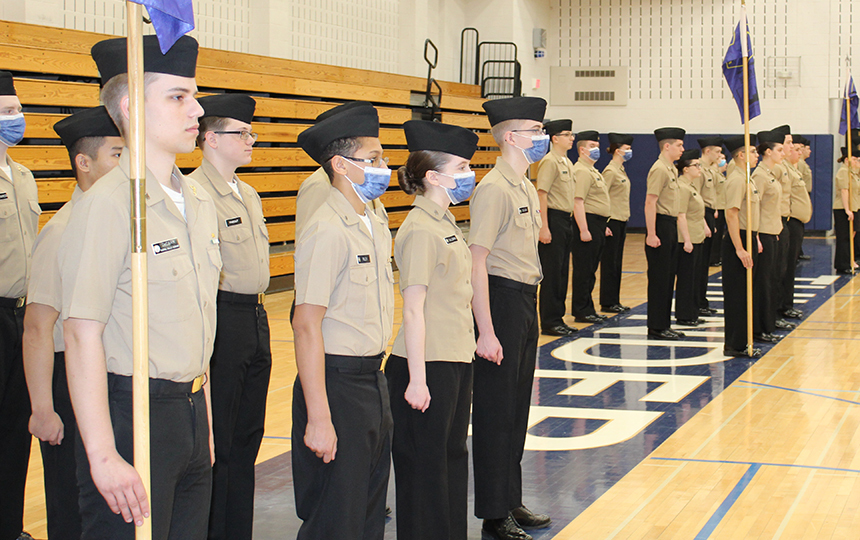 At the end of April, seven CVA NNDCC cadets are heading to the NJROTC Brain Brawl in San Diego, thanks in a big part to two large gifts. Richfield Springs American Legion Post 616 donated $5,000 and the Greater Rome Utica Chapter of the Military Officers Association of America donated $1,600.

"We are extremely thankful for the generosity of these two groups for helping make this trip possible."

The Brain Brawl is a Jeopardy-style competition that tests cadets' knowledge of U.S. history, military history, government, and science. Just 26 of more than 600 NJROTC and NNDCC chapters are invited each year. CVA cadets had intended to attend in 2021 until COVID forced the Navy to cancel the in-person event. CVA still managed and impressive 15th place.

"That was a solid finish, but our cadets are expecting to do even better competing in person," said Chief Snyder.  "We have some strong members who are quick on the buzzer. I think they will unnerve some of their competition."

Chief Snyder said the trip will broaden the cadets' navy education and understanding of military history; and it will include a little bit of fun.

The cadets will visit the U.S.S. Midway Museum, a 1,001-foot aircraft carrier that served 1945-1992. It houses a variety of military aircraft, exhibits, flight simulators, and a holographic theater. They will also tour several NROTC college campuses.

"I would like the community to know that Central Valley incurs no cost for this trip. The donations cover a large part of the trip. The remainder is paid for money raised through numerous NNDCC fundraisers," said Chief Snyder.

Chief Snyder believes that the trip will benefit the entire program at CVA.

"We hope that the Central Valley community will become excited by our cadets' success," he said. "Just by being invited, CVA showed it is in the top 2.5 percent of NJROTC and NNDCC programs in the country."

He also hopes that the program's success will translate into more students becoming involved.

This is not about getting more cadets; there are some important advantages to having a larger program," he explained.

If program enrollment grows to 10 percent of the high school student body, CVA can transition from NNDCC to NJROTC. At that point, the Navy takes on a big part of the program. That includes paying for two instructors, cadet uniforms, and even some of the costs to travel and compete.

"That funding is important," he said. "My salary and most of our uniforms come from the school's general budget. We fundraise for other needs."

"Don't get me wrong, we appreciate all of the support we receive from the district," he said. "It's just that we could do so much more and free up district resources if the Navy were underwriting the cost."

NNDCC's benefits go further than uniforms, trips, and competition. NNDCC provides cadets with important skills they need to be successful in any career they choose.

"We focus on leadership development, character building, and self-discipline—skills everyone needs in their education, their workplace, and in life," Chief Snyder said.

He also stressed that the group is not a recruiting arm for military service.

"We want our students to find a place in this world where they can thrive. It might be college, a trade school, the workplace, or the military," he said. "The most important thing is that we turn out great citizens who have the tools to be successful."